If you follow my Instagram (@thebabystepsblog) you know exactly what I’m talking about. Our second IUI was a failure. Another one. I can’t believe this happened again. 18 failed months in total, each one harder than the last.

Testing day, Wednesday, July 17, was much like testing day from our first IUI. My alarm was set for 5:40, but I woke up early in anticipation. However, I was smart and opened a test the night before so that J wouldn’t hear me opening it because I just *knew* this cycle was going to be the winner.

This time, I decided to use the First Response Early Result HPTs for a few reasons. 1) I couldn’t take seeing “Not Pregnant” on the screen like I did last month using the Clear Blue digital test. I figured it wouldn’t hurt as bad if I just saw one line and not two; 2) the FRER tests only need 6.3ml of HCG for a positive reading where the Clear Blue tests need 22ml, making the FRER tests better at detecting an early pregnancy or late implantation.

I quietly made my way out of bed and into our bathroom, grabbed a Dixie cup to pee in rather than peeing on the stick as lined tests are susceptible to evap lines. So I would pee in the cup and then to place the test into the urine. This is probably the lesser preferred method for women who are TTCing (at least for me), but I wanted to avoid a possibly evap line or a false positive. Once I placed the test in the cup, I turned it away from me so I wouldn’t keep glancing at it out of my peripheral vision. After I washed my face and brushed my teeth, it was time. Negative. Big fat negative. 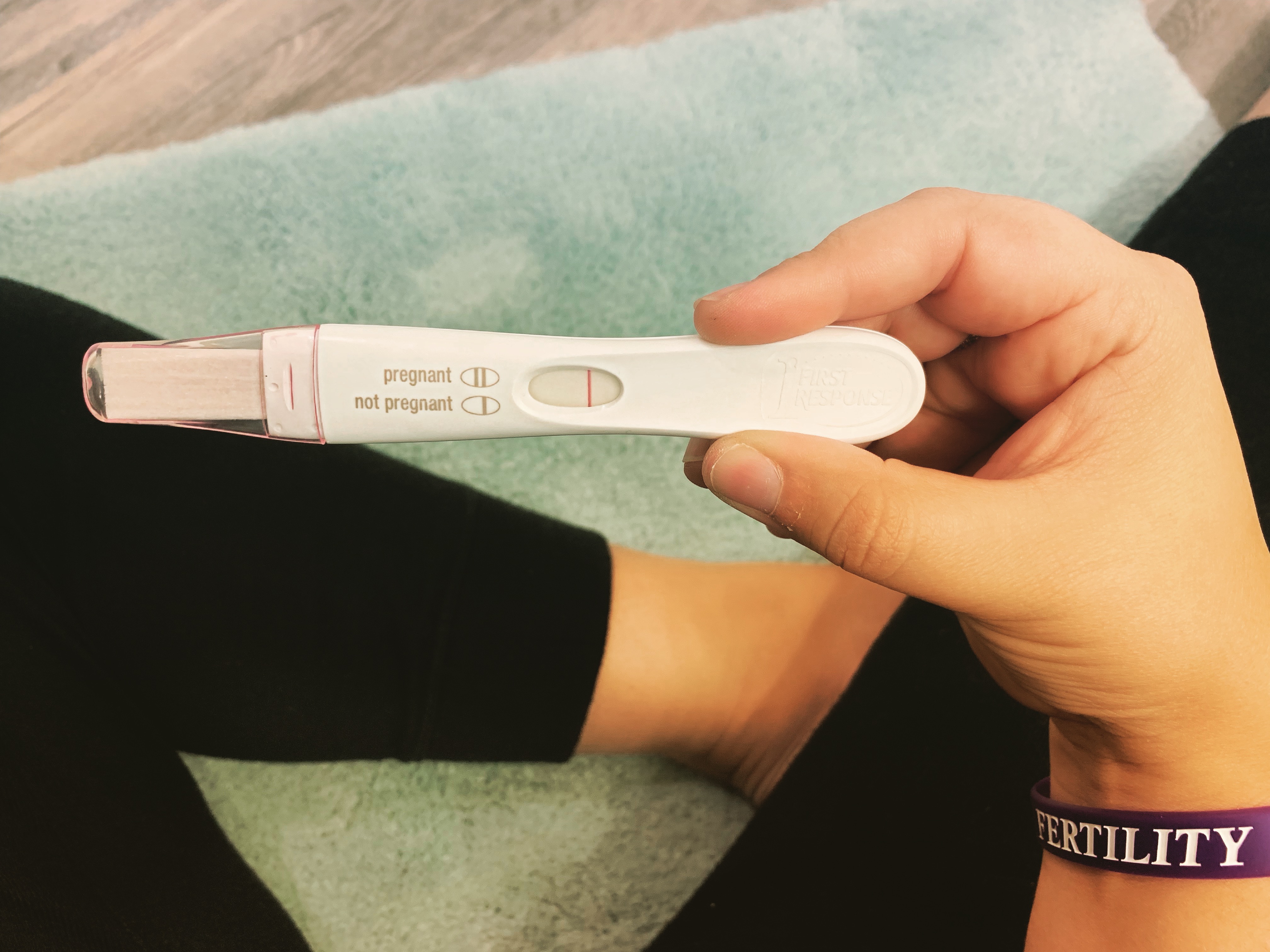 Cue the tears and then J coming in to cry with me. *I use the word “tears” loosely as we were actually sobbing uncontrollably. After about 20 minutes of negative talk, hatred for our journey and a lot of swearing, we had to try our best to keep our emotions at bay as the show must go on. You know how the story goes by now, put on a brave face, leave for work, call my mom, cry all over again but with her this time and fight back the tears until I was in my car alone on my way home.

This was definitely a day that I could have called out for a mental health day, but I had something more important to take care of. If you remember, I work on a college campus and on this particular day, I had a Mental Health First Aid training class for a full nine hours. Yep, nine long hours of learning how to help someone else with their mental health when mine was in the shitter that day. The class was a blessing in disguise as it was a small group of 15 staff members who all treated the room as a safe place. As others were comfortable opening up about their mental health struggles, I did too. As freeing as it was to open up about our struggles, I didn’t let anyone know how hard that day in particular was as I knew I wouldn’t be able to hold my composure. However, I did excuse myself to the restroom three times to cry, but I wiped my tears and returned with the same old brave face I wear so well. Although I did a pretty good job of holding it together that day, I knew that I wouldn’t be able to hold it together long enough to call the FIRM and let them know.

That night, J had a work event, so I knew I had a few hours alone to sulk and eat cake and candy for dinner until I was sick to my stomach (poor choice, I know). Once J came home, I could tell *something* was wrong, we all know what that something was. I have to tell you, he is not a talker when it comes to him emotions. He bottles everything up and then it eventually eats away at him to where he has a breakdown. That breakdown was happening in 3, 2, 1…. He let it all out. From the excitement to the disappoint and how he feels being the only “married guy in our circle without a child”. This was only the second time he broke down since our diagnosis, so I was very aware of everything he was saying so I could use those feelings to help me help him in the future. Although I say that I get it, I don’t quite understand what he is going through because I’m not him, just like he doesn’t quite get what I’m going through. After a few hours of talking and tears, we reminded each other that we are it; no one else knows what we are going through and we only have each other at the end of the day. This breakdown and incredibly hard day reminded me that although our support system tries their best to help, they don’t know what we need or don’t need, which is why I will be working on a post dedicated to helping those battling infertility. You’ll be the first to know when it’s posted.

I should tell you that I’ve never suffered from anxiety or depression until our diagnosis but I now know that infertile anxiety and depression are very real. This is such a big topic that I have decided to dedicate an entire post to it but know it will take me some time to write as these feelings are incredibly hard to deal with and get out while trying to make sense of it all.

PS – I called the FIRM the following day and fought the tears for the tears the entire time. Being that I called 24 hours after this failure compared to 48 hours after our first failure, I knew I was getting stronger. Small victories are still victories.

What to Expect When You’re Nowhere Near Expecting

I'm married to my best friend and am crazy about my family and friends, I'm obsessed with true crime and wine, and call myself a Jesus Loving Freak (but I promise not to push that on you). However, none of those things are the reason you or I are here - it's because my husband and I are battling infertility. I hope you find The Baby Steps Blog to be a place of safety, hope and humor just like I do! xo